First of all, sue me…  I’m loving the iPhone.  I never thought I would.  There are a few little annoyances, but overall it’s a great little widget.

Went to the Ak ARC flea market Saturday.  I had a table to sell kits, but I don’t know why I bothered.  I did (just barely, maybe) cover my breakfast, the table and my gas to drive there and back, so I guess it was OK.  Honestly, I think most of the stuff for sale was the same crap I’d seen last year.  There was, however, a table set up by the Omaha Maker group, and separately a ham had a 3D printer running printing out something or other, I never did figure out what.  So why did I go?  It was good to see and talk to some of the hams I only see once in a while.  Jack WA0SAQ was there, Dave WJ0Z and some others I seem to only see once every year or five.

I did some CNC engraving on the end panels for a new flavor of PicoKeyer.  I think it turned out pretty well.  It will be a little extra work — OK, a lot of extra work, but I think it will be worth it.  This will also probably be the motivation I need to finally break down and make a better fixture for the end panels I use for the boxes.  Maybe something I don’t have to stand there and hold each one in place.  It would be a worth a lot to me to be able to not stand there the whole time the mill is running, holding parts and trying to avoid getting an end mill through a thumbnail.  McMaster, here comes an order!

And…  some days I miss not having something that looks like airplane parts in the garage.  In a couple of weeks, though, I should have a “canoe” going and by Spring it should be looking airplane-y again.

I was using my new-ish Owon DS7102V scope tonight to troubleshoot a problem with a PicoKeyer firmware function.  After I got it fixed, I took a screen shot to show just how impressive the capture buffer is on this thing… 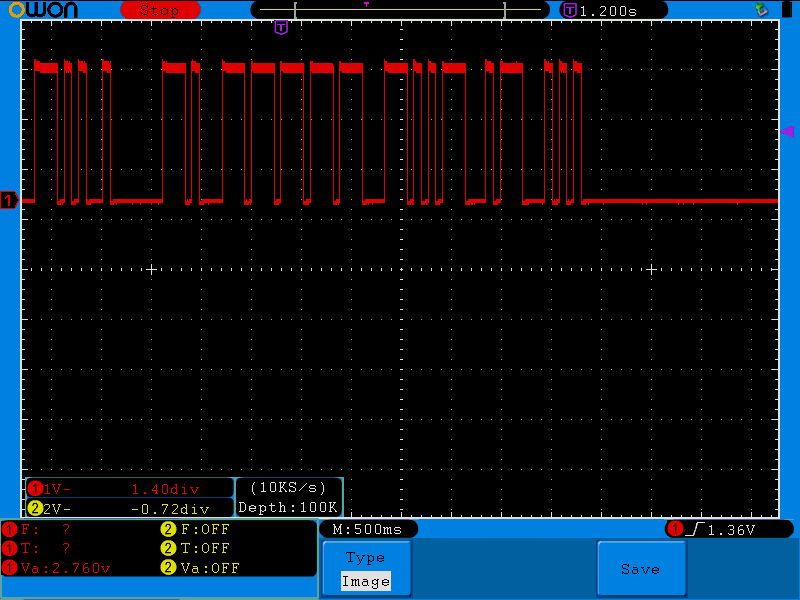 Yes, that’s “DE N0XAS” in Morse code, sent at maybe 15 WPM.  I set the scope up for single-shot capture, then saved the screen image to a USB drive.  Suh-weet.  I don’t think I posted these before, but here are some from when I was testing the ID-O-Matic II audio.

Well, at least with my blog posts.Â  I never seem to remember to update his thing when I should.Â  Let’s see…Â  in the past few months I have not blogged about…

Well, that just about catches it up, I guess.Â  I’ll try to post more here…Â  not that I expect anyone actually reads it!

I’ve been using the M3 CNC machine quite effectively to produce machined cabinets for one of my ham radio kits.Â  In a couple of hours the other day I was able to greatly improve the machine control programs for producing three of the parts, making the machining process faster and less hassle.Â  I’ve even posted a couple of Youtube videos of the machine doing its thing.

I’ve got two new kits that will have optional, custom modified cabinets.Â  For these I am hoping to do a little more complicated work.Â  In addition to various round, square and/or rectangular holes in end panels, I’m going to try some engraving to label the connector locations and maybe put a logo on them.Â  That will take a little more development work, including making a jig to hold the parts in a rigid, repeatable location.

The machine has been a real life saver in modifying some existing cabinets.Â  The manual process using a file was very time consuming, very difficult, and produced imperfect results.Â  Using the CNC mill gives me perfect results in about half the time of doing it manually…Â  and I can be doing other things while the job runs, coming back only to swap out parts when the program is finished.Â  I may eventually be investing in a new Gecko G540 driver, which should make the machine smoother, quieter and much faster.Â  For now, though, the cheap ($65 or so, including shipping) Chinese driver board is doing the job.

Well, back in March I made a couple of posts detailing the installation of the dual band mobile ham radio in my new pickup.Â  As some time has passed, I thought I should follow up on those posts with the latest news.

The mounting products I used turned out to be a complete bust.Â  The Command foam mounting tape gave up about the first day the truck was parked outside with the temperature over 65 or 70.Â  The kind-of-Velcro-like stuff I used for the speaker will hold on for an hour or two before that drops onto the floor.Â  I have not yet decided what my next step will be.Â  I may have to fabricate a U-mount for the speaker and drill a couple of small holes in the driver side kick panel to mount that.Â  For the control head, I’m debating still.Â  Someone makes a really slick no-holes F150 dash mount, but I don’t think it’s worth anywhere near the $40 they want for it ($50 after shipping).Â  Right now things are “just barely” hanging on, but I’ll need to fix them soon before the speaker cable gets twisted to death.

Last night I successfully ran my first “real” jobs on the CNC.Â  One was a jig to hold a number of PIcoKeyer-Plus cabinet end panels, which came out perfectly.Â  Then I used that to actually mill an end panel, which also worked exactly as I had it set up to do.Â  Today I’ll run a batch of end panels, and set up a jig to drill tiny speaker grilles in the cabinet tops.

It’s almost scary how perfectly the stuff is coming out.Â  I’m still learning about tool selection.Â  For example, I assumed a 4-flute end mill would be best for doing the cabinet because it will produce a smooth finish.Â  However, I think a 2-flute would be better.Â  I’m also learning how much material can be removed, and how fast, to get the best results.Â  Speed control for the spindle would be good, but for now I’ll settle for just getting the stuff done! 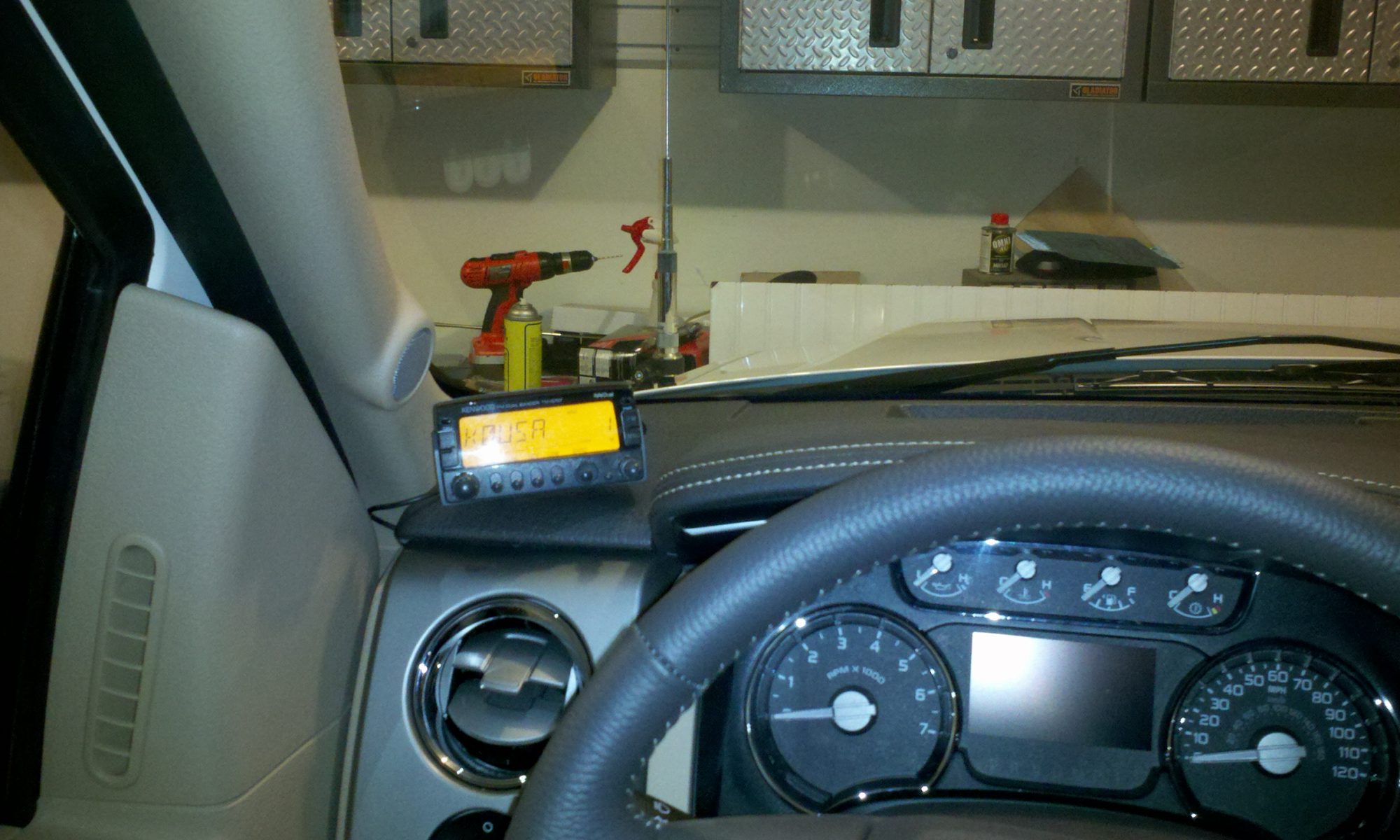 Well, it’s all in, and I’m very happy with the result.  It looks good, it works as it should.  Right down to the delayed shutoff — I can park and shut off the engine, the rig stays powered until I open a door (or some delay times out).  I mounted the control head with Command foam tape mounting tabs for easy removal if needed.  Also, my old roll of 3M foam tape finally got too old and these were all Wally World had.  🙂  You can click a picture for larger views.

The only thing I’m not sure about is the foam tape mounting for the control head.  If that doesn’t hold over the long term, I’ll probably switch to a ProClip.  It’s working for now, but it’s amazing how much you can see in a high-resolution picture that you don’t see when your eyeballs start aging.  The transceiver isn’t hard mounted; I’ll stick the hook side of some industrial strength Velcro to the top surface (it’s upside down) to keep it secure but it’s not shifting around even under hard braking.

I’ve spent the past couple of days working on getting the dual-band VHF/UHF ham radio (a Kenwood TM-G707A) installed in the new F-150. As of today it’s mostly done. All that’s left to do now is to mount the control head on the dash, and finish the antenna mount. I took it apart last night and re-painted it, since the original black paint had mostly flaked off of part of it.

The new truck is more installation-friendly than the Sport Trac, that’s for sure. Dashboard panels pop out with a simple tug, door sill plates pop up without breaking parts, and of course there is a lot more room for working under the dash. There’s a convenient pocket in the dash for the microphone, and plenty of room behind the rear seats for the transceiver. Much to my surprise, I found out the rear seats will flip down with no hassle to gain access to the area behind them.

F150forum.com has been a huge help in getting this done, from the tip about the rear seat latches to wiring ideas to someone mentioning ProClip mounts. When I’m finally finished with this project I’ll have a very nice looking and functional installation. On the off chance I ever decide to upgrade to a different radio, I’ll be able to keep most of the stuff in place and re-use the mounts. Given how little I use the mobile rig, though, I give that a pretty low probability.

Lisa and I took the new F150 to Des Moines and back this past weekend.Â  It’s every bit as smooth and quiet as we had hoped; I would say it probably comes close to most luxury cars.Â  Gas mileage was not spectacular, but I’ll reserve judgment on that issue.Â  We’re still in the break-in phase; in fact, there was under 100 miles on the odometer when we left.Â  Temperatures hovered at or below freezing for most of the weekend, and we had a stiff cross wind both ways.Â  I also have not put a bed cover on yet, and I know that will make a difference.

The EcoBoost engine pulls smooth and strong from idle to highway speeds; you really have no indication you have a V6 under the hood.Â  Horsepower and torque are higher than the new 5 liter V8.Â  In fact, it outperforms last year’s 5.4 liter by a good margin (320 HP/390 ft-lb for the 5.4, 365 HP/420 ft-lb for the little 3.5 EcoBoost).Â  This engine is amazing.Â  No turbo lag or whine, just quiet power from an engine that pulls like a mule.

I’m looking at what to do to get the ham rig installed.Â  There really isn’t a hidden spot in the cavernous F150 cab for the transceiver; I may be able to wedge it in under the seat, but I’m not sure yet.Â  I think there’s plenty of room under the dash, but I’m not inclined to drill anywhere.Â  I’ll have to do some looking.Â  The antenna might be a challenge as well; I believe that’s a fiberglass hood.

Finally got the new office / ham shack pretty much finished, cleaned up and took a few pics..

More to come later on.